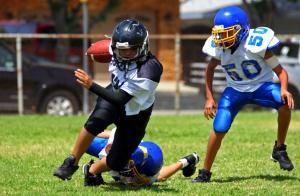 ScienceDaily (Sep. 13, 2010) — A new study from Hasbro Children’s Hospital finds visits to emergency departments for concussions that occurred during organized team sports have increased dramatically over a 10-year period, and appear to be highest in ice hockey and football. The number of sports-related concussions is highest in high school-aged athletes, but the number in younger athletes is significant and rising. The study is published in the September 2010 issue of Pediatrics and is now available online ahead of print.

In a review of national databases of emergency department (ED) visits, there were 502,000 visits to EDs for concussions in children aged 8 to 19 years in the period from 2001 through 2005; of those 65 percent were in the 14- to 19-year old age group while 35 percent were in the 8- to 13-year-old age group. Approximately half of all the ED visits for concussions were sports-related, and an estimated 95,000 of those visits were for concussions that occurred from one of the top five organized team sports: football, basketball, baseball, soccer and ice hockey. The researchers also note that in the period from 2001 through 2005, approximately four in 1,000 children aged 8 to 13 and six in 1,000 aged 14 to 19 had an ED visit for a sport-related concussion.

The researchers found that ED visits for organized team sport-related concussions doubled over the time period depicted and increased by over 200 percent in the 14- to 19-year old age group, while overall participation decreased by 13 percent in the same time period. Bakhos comments, “What was striking in our study is that the number of sport-related concussions has increased significantly over a 10-year period despite an overall decline in participation. Experts have hypothesized that this may be due to an increasing number of available sports activities, increasing competitiveness in youth sports, and increasing intensity of practice and play times. However, the increasing numbers may also be secondary to increased awareness and reporting.”

James Linakis, MD, PhD, is a pediatric emergency medicine physician with Hasbro Children’s Hospital and its Injury Prevention Center and is the senior author on the paper. He comments, “Our assessment highlights the need for further research and injury prevention strategies into sport-related concussion. This is especially true for the young athlete, with prevailing expert opinion suggesting that concussion in this age group can produce more severe neurologic after-effects, such as prolonged cognitive disturbances, disturbed skill acquisition, and other long-term effects.”

Despite the apparent increase in concussions in youth athletes, there are no comprehensive return-to-play guidelines for young athletes. The researchers also note that there are no evidence-based management guidelines for the treatment of these injuries, while there is agreement that young children cannot be managed in the same way as older adolescents. Linakis, who is also a physician with University Emergency Medicine Foundation and an associate professor at The Warren Alpert Medical School of Brown University, says, “Children need not only physical, but cognitive rest, and a slow-graded return to play and school after such injuries. As a result of this study, it is clear that we need more conservative guidelines for the management of younger children who suffer concussions.” Return-to-play assessments might include such strategies as neuropsychological testing, functional MRI, visual tracking technology and balance dysfunction tracking.

Bakhos concludes, “What this research tells us is that we need additional studies to provide guidance in management, prevention strategies and education for practitioners, coaches and athletes.”

Other researchers involved in the study with Bakhos and Linakis include Gregory Lockhart, MD and Richard Myers, BS, of Hasbro Children’s Hospital and Alpert Medical School.

Editor’s Note: This article is not intended to provide medical advice, diagnosis or treatment.

Telemedicine by
Doxy.me
Special COVID-19 Announcement- We are essential and OPEN to help those with aches & pains and who need rehab through in-person appointments. If you have a problem, but don’t feel comfortable coming in, check out our popular virtual PT sessions.
See More
X